jump to navigation
jump to search

Kuala Lumpur, 22 May 2017 – It was definitely a night of double celebration for British American Tobacco Malaysia (BAT Malaysia) at The BrandLaureate BestBrands Award 2016-2017 when its very own Managing Director, Erik Stoel was conferred the winner of the illustrious Brand Transformational Leadership Award and the Company for Most Sustainable Brand Award in the Business and Community Leadership category.


Stoel received his personal award from Guest of Honor, Yang Amat Berbahagia Tun Dato’ Sri Haji Abdullah Ahmad Badawi, the 5th Prime Minister of Malaysia and the newly appointed Patron of the Asia Pacific Brands Foundation. The Brand Transformational Leadership Award recognises corporate leaders who have stamped their mark in their areas of respective specialisation and who have played pivotal roles in spearheading the growth and transformation of their organisation and businesses. It is also said that a successful transformational brand leader is one who continues to push boundaries and explores new frontiers of continuously positioning their company as a game changer and brand influencer in their respective industry and Stoel clearly amplifies those attributes.


At the prestigious event, BAT Malaysia also took home the Most Sustainable Brand Award for being a market leader with strong brand equity and spirit of enterprise that allows them to break new grounds and grow their brand presence to stay ahead of the competition.


On receiving the award, Erik Stoel commented, “I share this award with the whole of my BAT Malaysia family. I am very fortunate to be leading very talented people in a fantastic company and this award is a testament to the passion, tenacity, commitment and sheer hard work put in by them day in and day out on our journey of transformation. This award is another positive step for us in the right direction. They say transformation is inevitable to ensure growth and I am proud to say that BAT Malaysia will continue with its unique brand power to push the business to greater heights.”

About Erik Stoel
No stranger to the BAT Group, Erik has been working for BAT since 1995 and has held various senior roles covering numerous markets in Eastern Europe, the Middle East and Asia. He served as Marketing Director for BAT Malaysia in 2010 before moving to Korea as BAT Korea’s Marketing Director in 2012. Subsequently, he was promoted to the role of Area Director North Asia Area, running Korea, Taiwan, Hong Kong and Macau before returning to BAT Malaysia to helm as Managing Director.


About the BrandLaureate BestBrands Awards 2016-2017

Held at The Majestic Hotel, Kuala Lumpur, the event was organised by the Asia Pacific Brands Foundation-BrandLaureate and the theme for this year’s awards is Take Responsibility of Your Brand for Your Brand Integrity, Quality & Credibility. Hailed as the thought leader in brands and branding and aimed at giving recognition on brand achievements in Malaysia and beyond, it was attended by local and international corporate leaders, industry captains, brand owners and leading personalities. 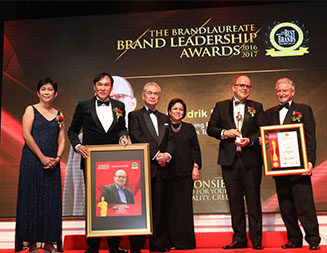 Caption: Members of BAT Malaysia’s Leadership team receiving the Most Sustainable Brand Award on behalf of the company